Skip to content
I’m always on the lookout for new things to photograph. I love people shots and black and white landscapes I will just add, that should read black and white landscapes by other people. I’ve never got the hang of it. I have a mate that gets me involved in all sorts from urban exploration (I’m always nervous about old buildings) to Car cemeteries. What I love most is taking people shots whether they are portraits or street like candids. It’s a varied lot my photo album. So to add to all this variation I can now add Bees to my list. That’s right this is going to be a Beelog post (Groan)

Ok the story behind these shots is that we have a family friend, a retired Doctor that keeps bees as a hobby. I had asked him the previous weekend if I could come along and take some shots of him at work with his hives. (I’d lease a 1100mm lens and take shots from a safe distance. Only joking:0). On Monday evening I got a big surprise and absolutely no time to think ,just grab my gear and make a Beeline (Another groan)for our friends house some 5mins by car. He had told me he had to catch a swarm in his garden so it would be great if I could come and take some shots. The word “SWARM” really got me thinking of those killer bee movies of the 70’s. Lets just say I got out of my car with more than a little skepticism.

I found Staale in his back garden looking up at a very tall tree. In the time it had taken for me to drive out to him the swarm had moved to a higher perch. Without a very tall ladder it would be impossible for us to reach. I was quite a sight to see all these bees swarming around us,one of nature’s wonders. The Bees were not at all interested in us at all they just wanted to get together. Staale told me the last swarm he had to deal with was over 8,5 kilos! That’s a lot of Bees.

Not being able to get hold of this swarm (Staale would wait until they moved again). Staale decided to show me his hives in the garden. He put on his gear and gave me a beekeepers hat to wear otherwise I was just normally dressed with long trousers and long armed T-shirt. What amazed me was the calmness of the whole process. Staale opened each hives in turn to show me the bees and their work. I forgot to keep my distance and soon forgot that these bees were not behind glass in a zoo or country fair. my flash didn’t bother the bees. Staale just said to keep out of the flight path to the hive openings so they don’t get angry. Instead of using smoke to quiet down the bees Staale used a fine mist of water from a pump can. Staale had told me that on the previous Friday he had to catch a swarm in the garden which had managed to escape only to have it escape once more from what he thought was a safe hive. Not having the time (We were leaving on a trip to Denmark) he left them and they found their own way back to the hive. So I got to meet “The Mad Queen” as he described her to me. She had however calmed down somewhat from their previous encounter and let us look at the work they had done during the weekend Staale and I were in Denmark.

I came away without a sting and wanting to take more shots. It was quite the experience ,breaking all my comfort zones. This will not be my last trip to Staale and his Bees, so stay tuned.
On closing I would just like to thank Staale for the chance to see him work with something he obviously loves so much.
PS.
I can see a Macro lens in my near future :0) 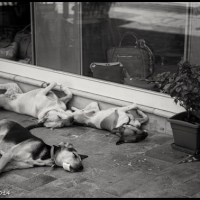 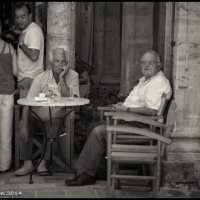 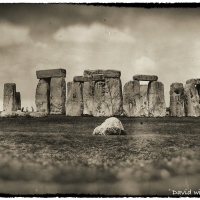 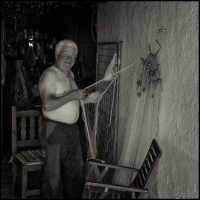 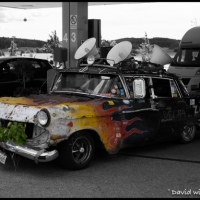 Hi I'm Martin Smith, a amateur photographer that likes to shoot solely film. I use black & white with the odd colour image thrown in and mainly use a Leica M4-2 & M3 with Summicron 35mm and 50mm lenses. I tend to shoot anything I like, objects, scenes, landscape or street life. My film of choice now is Fomapan 100 Classic.

| The beautiful art of film photography |

Cycling, pro cycling, and other stories